Last month, President Obama placed more stringent sanctions on Iran’s oil sales and financial transactions. And in the next breath, he claimed that because Iran is supposedly developing a nuclear weapon, Obama will “once again reaffirming [the US government’s] commitment to hold the Iranian government accountable for its actions.”

While Israel is threatening to attack Iran pre-emptively to “knock out” nuclear facilities, Benjamin Netanyahu, Israeli Prime Minister asserts that “all the sanctions and diplomacy so far have not set back the Iranian (nuclear) program by one iota And that’s why I believe that we need a strong and credible military threat coupled with the sanctions to have a chance to change that situation.”

Sanctions placed against Iran are directed at their economy and value of their currency because Iran has been using gold instead of the US dollar to trade with other nations for their oil.

Obama’s latest round of sanctions, by executive order, is aimed at preventing “payment mechanisms for the purchase of Iranian oil to circumvent existing sanctions.” By targeting specific banks, Bank of Kunlun of China and Elaf Islamic Bank of Iraq, Obama wants to make sure “transactions worth millions of dollars on behalf of Iranian banks that are subject to sanctions for their links to Iran’s illicit proliferation activities.”

Obama warned that the US will “expose any financial institution, no matter where they are located, that allows the increasingly desperate Iranian regime to retain access to the international financial system.”

Working for the banking Elite, Obama has made his position clear. He is using the might of the US military to stop Iran from further devaluation of the US dollar; and now threatening all other financial institutions and nations that deal with Iran or facilitate payment in any currency other than the US dollar.

Members of the Free Syrian Army (FSA) are not just tied to al-Qaeda, the CIA-funded fake Islamic terrorist group, they ARE al-Qaeda. In a video of members of the FSA, these men are brandishing AK-47s provided to them by the CIA and have al-Qaeda flags flying in the background.

Al-Qaeda has been used by the US government in insurgent recruitment and in destabilizing Middle Eastern governments. The new recruits, being trained by the CIA in Turkey, then being allocated to the FSA and being used to destroy the Syrian government are directly tied to al-Qaeda. In the mainstream media, al-Qaeda is still touted as a separate terrorist organization with no ties to the US government.

Tayyip Erdogan, the Turkish Prime Minister, is now decrying that his involvement in assisting the CIA has created a backlash of violence in his own country and compromised their national security.

Erdogan is reluctant to continue to cooperate with CIA training facilities that create more “troops” for the FSA who are released into Syria through the Turkish border. The further involvement of Turkey in attempting to “handover Assad” to the US government through the use of fake terrorist organizations is causing a Kurdish outcry while military training camps are turning out “a good number of Kurds” who have been taught how to covertly support the US and Israel movement toward forced regime change in Syria.

Posted by EndlessMemories in News, Right To Bear Arms on July 29, 2012

Last week, the delegates who attended the Arms Trade Treaty Conference (ATT) reportedly did not come to a consensus to ratify the ATT, but rather will come back to the issue later this year.
Further talks will likely take place at a UN General Assembly (UNGA) meeting wherein 192 nations could achieve the 2/3rd majority vote for ratification of the ATT.

According to the British delegation: “We feel that we could have agreed (a treaty). It is disappointing that more time is needed. But an arms-trade treaty is coming – not today – but soon. We’ve taken a big step forward.”

Although activists in support of a convention for global gun control advocated the need to prevent illicit trade of guns into conflicted zones, such as in Syria, those same activists blamed the US and Russia for causing a stalemate during the negotiations process.

Victoria Nuland, US Ambassador to the UN released a statement on the US State Department website wherein it was admitted that “the illicit trafficking of conventional arms is an important national security concern for the United States.”

The US has committed to an ATT that works towards a contribution “to international security, protect the sovereign right of states to conduct legitimate arms trade, and meet the objectives and concerns that we have been articulating throughout the negotiation” and the US government believes that the ATT “will make a valuable contribution to global security by helping to stem illicit arms transfers, and we will continue to look for ways for the international community to work together to improve the international arms transfer regime so that weapons aren’t transferred to people who would abuse them.”

The stance of the US government, in rejecting signature of the ATT over the trafficking of illicit arms directs the purpose of the CIA and Obama administration’s involvement in arming terrorist groups in order to facilitate foreign policy objectives in the Middle East with regard to the current situation in Syria and ultimately Iran.

Of recent, the Obama administration is focusing on increasing proliferation of arms, intelligence and training to the Free Syrian Army and other oppositional factions to facilitate a forced regime change in Syria.

The Trans-Pacific Partnership (TPP) “is a key trade initiative” that the Obama administration claims is “seeking to support jobs for American workers by boosting American exports to the dynamic Asia-Pacific region, promote manufacturing, innovation, and entrepreneurship, and at the same time, reflect in the agreement important values on key issues such as worker rights and the environment.”

However, the agenda of the TPP is a securitization of customs and border patrol services, telecommunications, corporate competition policy that directly effects immigration, corporate investments, and the addition of intellectual property rights with focus on copyright limitations.

The TPP, held in secret, is in actuality a multi-national trade agreement that seeks to extend intellectual property rights across the globe; creating an international enforcement scheme.

In a White House statement , Obama seeks to incorporate America with Canada and the other TPP countries in a “next-generation regional agreement that liberalizes trade and investment.” The press release explains that TPP will build upon “the commitments of NAFTA.”

The TPP defines intellectual property as:

The leaked document drafted as the US TPP Intellectual Property Rights Chapter clearly states that negotiators for Obama are actively pushing for the adaptation of copyright measures that further restrict that is outlined in the Anti-Counterfeiting Trade Agreement (ACTA) and other similar international treaties.

There is an initiative to control global IP enforcement by the UN under signatory treaty wherein nations will be mandated to enact domestic laws that have been worded to reflect the provisions in the TPP agreement.

The UN International Arms Trade Treaty Conference (ATT) is wrapping up in New York and their final draft is completed .

In 2009, Hillary Clinton, US Secretary of State, proudly announced that the Obama administration was in full support of the ATT. It was the intention of the US government to assist the UN in implementing and establishing “common international standards for the import, export, and transfer of conventional arms to help prevent the acquisition of arms by terrorists, criminals, and those who violate human rights or are subject to UN arms embargoes.”

In 2010, the US began talks with the UN regarding the initial drafting of the ATT.

With perfect globalist rhetoric , the UN claims that it is “not pursuing a global treaty to ban gun ownership by civilians.” But rather a “tightening controls over the international import, export and transfers of conventional arms, because without such controls it is easier for weapons to be diverted from the legal trade into the illegal market, and into the hands of terrorists, drug traffickers and criminal cartels.”

US Military and Local Police Working Together on American Streets 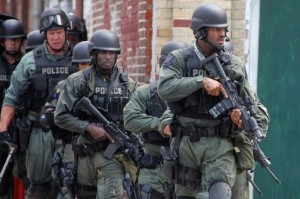 The US military is being used to protect civilian events, like the 2012 Democratic and Republican Party National Conventions in Tampa, Florida and Charlotte, North Carolina.

USNORTHCOM and Leon Panetta, US Secretary of Defense, has readily admitted that US armed forces will collaborate with local law enforcement “if called upon”.

In fact, more than 20,000 troops were brought home and readied for deployment within the US to assist in “civil unrest and crowd control”.

The US military will prop up the US Secret Service “for operational security reasons we do not discuss the numbers of military personnel and resources that are involved. Additionally, we do not share our operational plans,” said U.S. Navy Lt. Cdr. William G. Lewis.

The extent of use of military forces on civilian matters, as reported by mainstream media (MSM) have included the reallocation of hundreds of military police officers being trained to “assist local authorities” in investigation, crime scene and case building.

An estimate 500 military police and dogs will be used as “law enforcement battalions”. These soldiers, having served on tours in Afghanistan, will now be activated and based out of military bases across America to help local police forces.

National Guard has been witnessed in Virginia conducting “wellness checks” and patrolling residential neighborhoods as well as downtown city areas.

In Southern California, the TSA have been caught patrolling train stations and bus terminals.

The US Congress has given over $25 million in more funding to support unannounced TSA checkpoints.

The Israeli government is bracing for an attack from Iran during the 2012 Olympic Games being held in London, England. The supposition, although without factual backing, is agreed to be a possibility by politicians, diplomats, security officials and organizing committee personnel.

Israeli alarmists are seeking to frame Iran to justify a future military strike by claim that England is within missile range from Iranian posts. UK officials have reportedly shown their apprehension over the possibility that Iran could be planning an attack.

An Israeli special team has released a number of steps to be taken in response to such an attack. They have prepared a special command center, secret safe houses for foreign leaders and emergency evacuation routes for dignitaries.

British police have been given these recommendations and focused on practicing for mass protests should war break out.

The UK government has charged thousands of employees to patrol their borders; which are now threatened by strikes due to massive shortage of private security staff.