Posted by EndlessMemories in Cancer, Fluoride, Health, News on August 8, 2012

Posted by EndlessMemories in Fluoride, Health, News on August 7, 2012

Fluoride is added to 70 percent of U.S. public drinking water supplies to aid in the prevention of cavities.

This benefit is dubious at best, as there is practically no difference in tooth decay rates between fluoridated and non-fluoridated countries, and no difference between states that fluoridate a high versus low percentage of their water.

Yet, while fluoride in drinking water does NOT decrease rates of tooth decay, numerous studies show that this chemical has a wide array of devastating health effects – one of them being lowered IQ.

Yet Another Study Links Fluoride to Lower IQ Levels

A review of brain studies involving the use of fluoride has concluded that one of the adverse effects of fluoride exposure on children is damage to their neurological development.1 According to the Harvard researchers, children who lived in high-fluoride areas had “significantly lower IQ than those in low fluoride areas,” with the authors noting:

“The results support the possibility of an adverse effect of high fluoride exposure on children’s neurodevelopment.“

This just adds to the growing number of animal and human studies demonstrating the damage fluoride inflicts on your brain, including your pineal gland. The results of one study looking at children’s intelligence in two towns – one with fluoridated water and one without – were particularly revealing, with about 28 percent of the children in the low-fluoride area scoring as “bright, normal or higher intelligence” compared to only 8 percent in the high-fluoride area.2

Further, 15 percent of children in the high-fluoride city had signs of mental retardation, compared with only 6 percent in the low-fluoride city. And the study even accounted for other potential variables, such as lead exposure, iodine deficiency or a history of brain disease or head injury. There have been over 23 human studies and 100 animal studies linking fluoride to brain damage.

[NaturalNews] The mainstream media is at it again, lying to the public about fluoride. This time, the culprit is HealthDay, a “canned news” service that spits out lies and disinformation to be published by subscribing websites. Recently, HealthDay put out a story by author Alan Mozes claiming that bottled water might be harming children’s dental health because there’s no fluoride in it! (http://consumer.healthday.com/Article.asp?AID=667053)

And to really push their lie, they print the following conglomeration of total disinfo:

A salt formed from the combination of fluorine and soil and rock minerals, fluoride is voluntarily added by the vast majority of states and/or local municipalities…

This statement is, of course, a complete fabrication. The so-called “fluoride” actually added to municipal water supplies does not come from soil and rock minerals; it comes from industrial waste facilities and phosphate mining scrubbers: http://tv.naturalnews.com/v.asp?v=905DEA3798062673BC2C54E981BC8F07.

Much of it is imported from chemical companies in China, and it often contains over 100 different chemicals — including radioactive elements — which aren’t even fluoride!
http://tv.naturalnews.com/v.asp?v=670D87333DF262F0EFE6422816901CC1

These toxic chemicals are so highly corrosive that they eat metal, undercover footage reveals:
http://tv.naturalnews.com/v.asp?v=A836C957ADAE569341FC01576B3D1A10

Even worse, HealthDay tries to make fluoride sound like something everybody wants by saying it is “voluntarily added by the vast majority of states…”

This is a lie as well. Fluoride is mandatory in the water for those people who are unfortunate to live in a fluoridated area. They never “volunteered” to have fluoride in their water. They were never given a choice. To write that fluoride is “voluntarily added” — against the will of many members of the public — is wholly deceptive. To people turning on their tap water, fluoride is mandatory!

Saying that fluoride is “voluntary” is like saying breathing air pollution is voluntary, too, because chemical plants “voluntarily” spew toxic pollution into the air. Such word choice is highly deceptive journalism, if you can even call it journalism. (It’s really just blatant propaganda.)

Milwaukee Becomes The Latest Of Many Cities To End Water Fluoridation 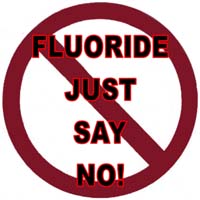 Milwaukee has become the latest city that opts to end water fluoridation.

With studies such as the latest Harvard study linking fluoride to lower IQ, it is of no surprise that we saw hundreds of dentists last year rise up and stake a stance against water fluoridation.

Adding a major addendum to this recent event in Milwaukee, is the fact that there were a total of 37 cities which outright rejected & displaced water fluoridation in 2011.

With the many dangers & dark history revolving around fluoride, its no wonder more cities are taking a stance in fighting for their health rights, as opposed to making the dire mistake of leaving their health to the government via the erroneous water fluoridation America has been historically predisposed too.

Posted by EndlessMemories in Fluoride, Health, News on July 27, 2012

via: NaturalSociety
by: Anthony Gucciardi
July 26, 2012

If the scientific link between fluoride exposure and a noted decreased in IQ is a conspiracy theory, then perhaps the Harvard researchers who just confirmed such a link should be tarred and feathered by the ‘evidence-based’ medical media. In a telling review of a variety of studies that have demonstrated just how significantly fluoride can damage the brain and subsequently your IQ, Harvard University scientists stated ”our results support the possibility of adverse effects of fluoride exposures on children’s neurodevelopment.”

The most outstanding component to the study is where it was published. Authors published their conclusion online in the July 20th edition of the prominent journal Environmental Health Perspectives, a federal government medical journal stemming from the United States National Institute of Environmental Health Sciences. The very same government that has continually asserted that water fluoridation is both perfectly safe and ‘effective’ at aiding the health of citizens who consume it on a daily basis.

In the past, the US government has actually been forced to call for lower fluoridation levels as previous research had also drawn a link between fluoride exposure and a host of neurotoxic effects. In the latest research by Harvard, it is made even more explicitly clear just how toxic fluoride can be to the body. In a written statement, researchers state:

This should come as no surprise to those who have followed fluoride research over the past several years. As far back as 1977, for instance, epidemiological studies performed by the head of the Cytochemistry Section at the National Cancer Institute Dr. Dean Burk revealed that fluoride exposure led to increased tumor growth – even at levels as low as 1 ppm (the standard for United States drinking water). Beyond revealing an accelerated tumor growth rate of 25% in his research, fluoride was found to produce melanotic tumors, transform normal cells into cancer cells and increases the carcinogenesis of other chemicals.

In 1977, Dr. Burk estimated that fluoridation has actually caused about 10,000 deaths according to his research.

It will come as no surprise, then, that even the EPA — an agency charged with protecting the people — has classified fluoride as a substance with ”with substantial evidence of developmental neurotoxicity.”  Perhaps the EPA is also run by blubbering conspiracy theorists. In another entry by study authors, it is explained how fluoride actually attacks the brain in unborn children and essentially launches a direct assault on their neurological development:

”Fluoride readily crosses the placenta. Fluoride exposure to the developing brain, which is much more susceptible to injury caused by toxicants than is the mature brain, may possibly lead to damage of a permanent nature.”

But will the United States government answer to the study? As mentioned, many studies have exposed the same correlation of IQ-crushing fluoride intake.  Paul Connett, Ph.D. and director of the Fluoride Action Network was one of the many activists to speak out regarding the last study to highlight the association. At the time, there were 23 former studies on the matter, and Connett felt that this 24th study was by far the strongest. And what was done? Unfortunately, it was brushed under the rug by mainstream health organizations who continue to assert that fluoride is perfectly safe. Some even recommend supplementing with fluoride pills.

In regards to the last breaking study, Connett stated:

“In this study we found a significant dose-response relation between fluoride level in serum and children’s IQ…This is the 24th study that has found this association, but this study is stronger than the rest.”

Will the latest Harvard-backed study be ignored by major public health organizations, or will serious change be initiated?

Posted by EndlessMemories in Fluoride, Health, News on July 19, 2012

There are three maladies involving the thyroid. Not everyone knows he or she has a thyroid issue even while exhibiting low energy or the inability to lose weight. One is an autoimmune disease and the other two are conditions.

Hypothyroidism is the more common condition with its symptoms of low energy, fatigue, low libido, overweight problems and sensitivity to cold.

Now, fluoride is in over 75 percent of USA’s public water supplies, to keep American citizens dumb and docile with decreased thyroid hormone production.

Hypothyroidism may be the most common hormonal deficiency in the Western world. It can even occur when the thyroid does produce enough thyroid hormones that are not utilized properly. That’s known as thyroid hormone resistance, which produces the same symptoms as hypothyroidism.

Many who think they have fibromyalgia may simply have one of these two manifestations of hypothyroidism. According to Dr. John Lowe, conventional testing can fall short of diagnosing hypothyroidism, especially for those with thyroid hormone resistance.

The cancer epidemic is a soft-kill operation and a move by the world’s so-called elites to cull the human population. It is well documented that the Club of Rome, Bill Gates, Ted Turner, the Rockefellers, Warren Buffet and many other globalists plan to dominate and decimate humanity with their population reduction agenda.

As we will see, the globalists first cause the cancer and then provide us with their ineffective treatments (not cures) for profit. This method is known as Problem – Reaction – Solution.

According to the American Cancer Society, 1,638,910 new cancer cases will arise in the United States during 2012. Approximately 577,190 American cancer patients are expected to die from their cancer this year as well. One in every two men will suffer from cancer (one in four will die) as will one in every three women (one in five will die). According to the Centers for Disease Control and Prevention, cancer is the second leading cause of death, closely trailing heart disease.

In 1971, President Nixon and Congress declared war on cancer. Since then, the federal government has spent well over $105 billion to battle cancer. In 2010 alone, the National Cancer Institute had a budget of $6.4 billion. As of March 2011, the Susan B. Komen Foundation, allegedly leading the fight against breast cancer, had $439,451,449 in “total public support and revenue.” Pharmaceutical giant Merck alone had a 2010 research and development budget of 8.12 billion.

Why all the death and suffering despite billions, if not trillions, in government and private cancer research? Why have cancer treatments remained almost unchanged since the 1950s: toxic radiation, toxic chemotherapy, and surgery?

The answer is simple: treating cancer is profitable; curing it is not. Cancer also furthers the globalist goal of massive depopulation.