The Lies Behind Fluoride 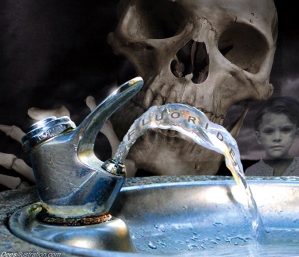 The establishment claims that fluoride helps tooth decay.  Yet, the deeper one delves into the totality of facts and history behind this topic, the more one’s very innards churn wondering what really is going on.

Let us get down to the core issues regarding this topic.

About 66% of the public drinking water in the United States is fluoridated.  Conversely, 98% of all of Europe has rejected water fluoridation and their children’s teeth are just as healthy if not better.

Fluoride has been duplicitously advertised as a method to fight cavities for decades.  However, there have been countless studies that have taken place over the years that have identified that fluoride is in fact a neurotoxin.

This soluble salt has been linked to a variety of accute, and severely chronic health issues.

Sodium Fluoride, on the other hand, is a synthetic industrial waste product of the nuclear, aluminum, and phosphate fertilizer industries.  This particular type of fluoride has an amazing capability to combine and increase the potency of other toxic materials.  The sodium fluoride obtained from industrial waste and added to water supplies is also already contaminated with lead, aluminum, and cadmium.

Various permutatins of Sodium Fluoride are also in many insecticides for homes and pesticides for crops.  In some instances, it is even added to baby foods and bottled waters.

It damages the liver and kidneys, weakens the immune system, creates sysmptoms that mimic fibromyalgia, and performs as a Trojan Horse to carry aluminum across the blood brain barrier.  The latter is recognized as a source of the notorious “dumbing down” with lower IQ’s and Alzheimer’s effects of fluoride.

Some other side effects of fluoride include lower IQ, mental retardation, brain damage, skeletal fluorosis, increased bone fractures, genetic damage, dental fluorosis, gastrointestinal disturbances, and the pineal gland has been also shown to be the primary target of fluoride.  Fluoride also has the potential to deteriorate thyroid function.

Additional dangers of fluoride include cancer, hormone disruption and even premature births.
Another point to keep in mind is that fluoride was additionally found to lower sperm count, estrogen and testosterone levels.

Recently, Sodium Fluoride has even been linked to the number one cause of death – cardiovascular disease – which in 2008 killed 17 million people.

Fluoride given to rats produced bone cancer and liver cancer and the results were doctored to make it look like fluoride had not caused as much cancer.

The Government itself has even admited fluoride was hurting children.

Fluoride is so dangerous that in one rare instance, there was a chemical spill at a treatment facility in Rock Island, III., which required emergency crews to use hazmat suits – the very same type of suits being used by the workers that were involved in the Fukushima Nuclear Plant in Japan.  Upon spilling, the chemical actually began smoldering through parking lot cement.

In fact, Nobel Prize Winner Dr. Arvid Carlson and a large group of EPA scientists have called for the banning of fluoride because we do not have any way of knowing how much we are ingesting and we do not know if we are being poisoned.  Hundreds of audacious dentists have spoken out againts water fluoridation as well.

The journal Environmental Health Perspectives pre-published a study confirming that brain damage occurs in children who have been subjected to fluoridated water.

Paul Connet, Ph.D., director of the Fluoride Action Network [FAN] stated, “This is the 24th study that has found this association, but this study is stronger than the rest because the authors have controlled for key confounding variables and in addition to correlating lowered IQ with levels of fluoride in the water, the authors found a correlation between lowered IQ and fluoride levels in children’s blood.  This brings us closer to a cause and effect relationship between fluoride exposure and brain damage in children.”

“What is also striking is that the levels of the fluoride in the community where the lowered IQs were recorded were lower than the EPA’s so-called ‘safe’ drinking water standard for fluoride of 4 ppm and far too close for comfort to the levels used in artificial fluoridation programs [0.7 – 1.2 ppm],” said Connett.

Furthermore, Science and Health Officer at FAN, Tara Blank, Ph.D, went on record stating “This should be the study that finally ends water fluoridation.”

Another disconcerting consideration includes the fact that the main ingredient in rat poison is sodium fluoride.    In fact, since the late 1800s, fluoride even began being used in rat poison and insecticides.

The main concern of many regarding this topic is the fact that there is such immense water fluoridation taking place.  Rewinding a bit, the first occurrence of fluoridated drinking water on Earth was found in Germany’s Nazi prison camp.  The Gestapo had little concern about fluoride’s supposed effect on children’s teeth; their alleged reason for mass-medicating water with sodium fluoride was to sterilize humans and force the people in their concentration camps into calm submission.
The following is an excerpt of a letter received by the Lee Foundation for Nutritional Research, Milwaukee Wisconsin, on October 2nd 1954, from Mr. Charles Perkins, a chemist:

“In the 1930’s, Hitler and the German Nazi’s envisioned a world to be dominated and controlled by a Nazi philosophy of pan-Germanism.  The German chemists worked out a very ingenious and far-reaching plan of mass-control which was submitted to and adopted by the German General Staff.  This plan was to control the population in any given area through mass medication of drinking water supplies.  By this method they could control the population in whole areas, reduce population by water medication that would produce sterility in women, and so on.  In this scheme of mass-control, sodium fluoride occupied a prominent place.

“Repeated doses of infinitesimal amounts of fluoride will in time reduce an individual’s power to resist domination, by slowly poisoning and narcotizing a certain area of the brain, thus making him submissive to the will of those who wish to govern him.  [A convenient light lobotomy]

Russians were also staunch supporters of the use of fluoride and implemented it into their prison camps as a tranquilizer many decades ago.

Would it not be healthier and more efficient to supplement water with something more advantageous and safe such as vitamins to promote overall health instead of putting such a toxic chemical such as sodium fluoride in the water?

Due to all the evidence amassed by all the researchers and doctors involved in the studies of fluoride we can discern that fluoride causes far more problems than it solves.

Something is amyss here.

We need to ask ourselves, knowing all of the aforementioned facts regarding fluoride, is it really possible that water fluoridation is being done for the right reasons, when people already buy their own toothpaste?

Sodium Fluoride is the most toxic ionic molecule outside of potassium dichormate.  The addition of such an outright noxious compound in [y]our water supply is beyond insane.

There is hope though.  By the end of 2011, 37 communities had voted to end water fluoridation in the United States.  How many will follow these setps in 2012?

Knowing this, what is naturally the next step?  For starters, that would be to avoid fluoride contamination.

The first step in detoxifying is to curb taking in toxins. Purifying water by reverse osmosis or distillation in fluoridated water communities is a good start to slowing down your fluoride contamination. Distillation comes with a bit of controversy, as all the minerals are removed. A great mineral supplement such as Fulvic Acid [not folic acid] or unsulfured blackstrap molasses is recommended if you distill your water.

Avoiding sprayed, commercially grown foods while consuming organic or locally grown foods is another big step. Watch out for processed foods such as instant tea, grape juice products, and soy milk for babies. They all contain high concentrations of sodium fluoride. So do many pharmaceutical “medicines.”  By minimizing your sodium fluoride intake, your body can begin eliminating the fluorides in your system slowly.

Magnesium is a very important mineral that many are lacking. Besides being so important in the metabolism and synthesis of nutrients within your cells, it also inhibits the absorption of fluoride into your cells!  Along with magnesium, calcium seems to help attract the fluorides away from your bones and teeth, allowing your body to eliminate those toxins. So during any detox efforts with fluoride, it is essential that you include a healthy supplemental dose of absorbable calcium/magnesium as part of the protocol.

Moreover, Iodine supplementation has been clinically demonstrated to increase the urine irrigation of sodium fluoride from the body as calcium fluoride. The calcium is robbed from your body, so make sure you are taking effective calcium and magnesium supplements.  Lecithin is recommended as an adjunct to using iodine for eliminating fluorides.

Iodine is another nutrient lacking in most diets and causing hypothyroid symptoms of lethargy or metabolic imbalances. Eating lots of seafood for iodine has it’s constantly rising mercury hazards. Seaweed foods andiodine supplements that combine iodine and potassium iodide are highly recommended over sea food by most.

Tamarind, originally indigenous to Africa but migrated into India and Southeast Asia, has been used medicinally in Ayurvedic Medicine. The pulp, bark, and leaves from the tree can be converted to teas and strong tinctures, which have also shown the ability to eliminate fluorides through the urine.

Liver Cleanses are considered effective for eliminating fluorides and other toxins. There are two types of liver cleansing, both of which can be performed easily at home over a week or two of time. One of the protocols focuses on the liver itself, and the other cleanses the gall bladder, which is directly connected with liver functions. Simple instructions for both can be found on line with search engine inquiries.

Boron was studied in other parts of the world with pronounced success for fluoride detoxification. Borox, which contains boron, has a history of anecdotal success for detoxifying sodium fluoride. Yes, this is the borox you can find in the laundry aisles of some supermarkets. It needs to be taken in with pure water in small quantities.

Dry Saunas combined with exercise releases sodium fluoride stored in fatty tissues. It can be intense enough to cause side effects or an occasional healing crisis. So keep the pure water intake high and drink some chickweed tea to protect the kidneys while using a highly absorbable cal/mag supplement. Lecithin is another useful adjunct to this protocol for fluoride detoxification.

There is a myriad of additional information outthere regarding fluoride.  For the well being of you and yours, I heed you to take time to research this and many other imperative topics.  Overwhelming scientific evidence is right at the tip of your fingertips.  All it takes is time and patience – education is key.

This entry was posted on February 19, 2012, 3:37 am and is filed under Abolishing The Blue Pill Matrix - TRPG Original Content, Control Grid, Fluoride, The Red Pill Guides. You can follow any responses to this entry through RSS 2.0. You can leave a response, or trackback from your own site.